​Following a hectic and emotionally draining start to March for our supporters, we have been trying to work through the results provided to us from the most recent PTB survey. We wish to thank everybody who completed the survey and appreciate the time you have taken to provide us with the answers. These have provided ourselves with the opportunity to find out how Latics fans are feeling about their club amid news of the recent financial events.

It is clear that lessons need to be learned from this in terms of engagement as only a few weeks ago, we were told how the club had a clean bill of health financially, yet this has proved not to be the case. Despite the rumours of Boundary Park being purchased, this only appears to have raised more questions than given us answers. While it has the potential to be a good thing, the devil, as they say, is in the detail.

In terms of the survey, we received 732 responses (61 more than our previous survey conducted in November 2019). In order to provide a detailed analysis, we have split this into separate headings. Of course, people will have their own interpretation on the results and to offer full transparency we have published the results that we have pulled out of the answers provided. You can also access the results via the link below:​ ​

This being said, if there are any statistics you would like us to source for you, please let us know and we will be happy to complete this for you.

What we have seen is a massive increase in the number of season ticket holders that have completed the survey, we think as a result of the issues with the North Stand.

Based on an average of 3,037 home fans this season, that equates to around 20% of our home attendance. We feel this is a good ratio in order to provide accurate results across the broader fanbase.

Where do you sit?

As mentioned above, 50% stated that they were season ticket holders. Of those Season Ticket Holders, as things currently stand

Based on season ticket sales of circa 2600 last season (information provided by Billy Thompson on twitter earlier in the season) this would suggest the following:

– 598 season tickets being sold for definite

– The possibility of increasing to 1326 if ALL people currently on the fence then decided to buy
– Should these figures be accurate, the maximum monetary value received from season tickets would be £477,360 (before any VAT deductions). However, this of course would not be precise due to this being ALL season tickets sold being adult season tickets at full price (£360) and not at early bird price (£270).

Given the ongoing situation with the use of the North Stand, we felt it prudent to ascertain whether this is having an effect on people’s decisions to renew:

Therefore we can conclude, as we have tried to tell the club, that the ongoing situation has had a detrimental impact, as the number of people definitely not renewing has doubled and the number of people renewing has halved. This is unacceptable and despite recent reassurances from the club that season tickets will be sold in the North Stand for the 20/21 season, it’s obvious that clear, decisive action needs to be taken before these devoted season ticket holders are lost. Hopefully, the reversal of the decision to sell STs in the NS will result in a change of opinion.

It is a distinct possibility that based on these projections, the home attendance at Boundary Park next season could well fall even further and lie between the 2,000-2,500 mark (including away fans). With minimal “pay on the day” into Boundary Park this would leave our backs against the wall financially and for a club with our history, would be incomprehensible.

What we have seen here since our last survey in November is that more fans have spoken and said that they wouldn’t renew their season ticket for the 2020/21 season.  The drop from 15% (which was already unacceptable) to 13% shows that a large number of fans are clearly not happy with the direction the club is going.

What would make you purchase a ticket?

In regards to season tickets, we asked what would change people’s minds. 524 people chose to answer this question, with 208 choosing not to respond. This was a free format question as we didn’t want to influence anyone’s answers. Following working through these the five top results were as follows:​ ​

What is a fair price for a season ticket?

We also asked in the survey what price they believed to be a fair price for an adult season ticket at this current time. 6 people skipped this question whilst 36 voted other and specified their comments. The answers provided were as follows:​ ​ 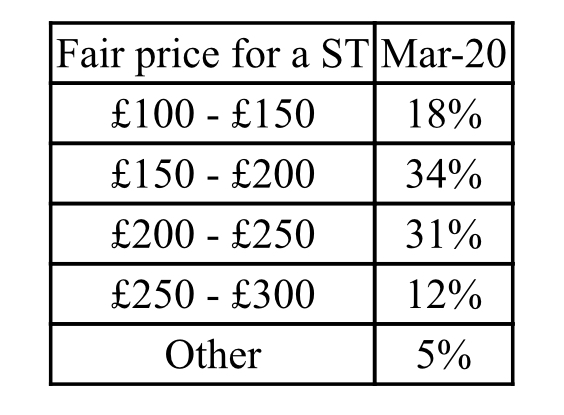 Given that the early bird price is £270, this would suggest that just under 85% of supporters who completed this question would consider the price for next season’s season ticket more expensive than what they believe to be fair. The full price of £360 would then suggest that at least 95% of supporters believe this price to be too high for 4th tier football in England.​ ​ There are many other breakdowns of potential season ticket sales broken down into stands etc. which you can see on the graphs provided on our website.​ ​

Fan Engagement is key in keeping supporters at Boundary Park but also a major factor when trying to entice supporters back to attend home games, whether these be lapsed supporters or potential new supporters. Fan Engagement can be anything to supporters, it could be the level of communication from the club to supporters, the level of connection supporters feel with players, manager and/or ownership. It could be matchday experience and whether they enjoy their time at Boundary Park, the list is pretty much endless. We left this with supporters and asked them for how “engaged” they currently feel with the club. 1 was the lowest score, with 10 the highest score that could be given. ​ ​ You can see the exact scores on the graphic provided.

As you can see the fan engagement has reduced even further in the last few months despite a small upturn in form on the pitch and what could be considered an acceptable January window.  As described above, this is an invisible factor and can be attributed to many things but none the less, this is a good representation of how a large group of fans “feel” about the club at the current time.  We were disgusted with the score in November, and to see this reduce further raises even more red flags to us as a group.  We will be approaching the club for their comments on this as a matter of urgency.

One question which was asked in our survey was to state which change they believed had been the most positive since Mr Abdallah Lemsagam took the majority shareholding of the club back in January 2018. As the answers were too varied we couldn’t find any trends. As you will see on the graphics provided, there are notable mentions of “kept the club alive”, “signing Rowe”, “The pitch looks better” whilst also mentions of “haha“, “can’t think of any” and “nothing” which suggests that opinion is, at best, divided based on this with question.​

We, as ever, are always looking for ideas, suggestions and also are more than happy to take on board any constructive criticism put towards ourselves. PTB will always try to represent supporters in the way that the majority want representing. This includes ways of approach, ideas that supporters want implementing within reason but above everything we want to be the voice of the supporters at Oldham Athletic. With conversations, it is hard to gauge whether people are happy, satisfied or unhappy with our performance to date and as such, in order to evaluate our current performance to date, we wanted to add a couple of questions in, so we can look at the results and try to improve so we can stay trusted and supported amongst the Oldham Athletic fan base.​ ​ The question that we put to supporters about our performance was “on a scale of 1 (poor) to 10 (excellent), how would you rate the performance of PTB since our inception in October 2019?”

​You will be able to see the breakdown of the answers on graphics provided, 7 supporters chose to skip this question. From the scores provided, out of 725 people who answered this question, 78.34% rated PTB’s performance 7+ out of 10. We are overwhelmed by this response. Despite being happy with this however, our average score is 7.58 out of 10 which shows that there is plenty of room to improve. Rest assured we will be doing everything to increase this score over the coming months prior to any further surveys we will produce.​We will analyse the results from your feedback and provide a more detailed, separate update relating to this and what our next steps should be. Thanks for all your suggestions in relation to this.

Would you support a PTB charity event?

You, the fans, have chosen Dr Kershaws as our chosen charity and as part of this we wanted to gauge whether there would be support for a charity evening with an ex-player. The results were as follows: 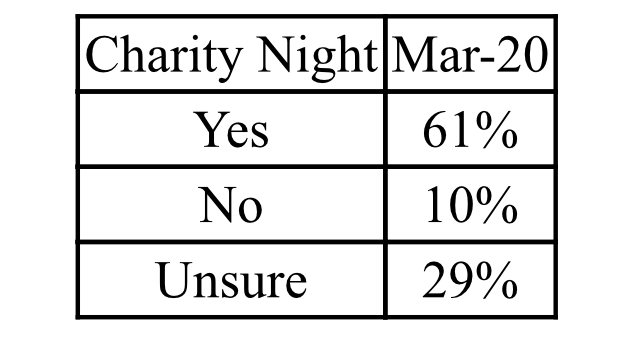 We feel this is encouraging and we are currently looking into this and hope to be able to provide a further update in due course regarding the potential of an event like this taking place.​ ​

Once again, we will be sending these across to the club and asking for their comments on the results as we did earlier in the season. It’s only fair the club have the opportunity to respond and it is their prerogative if they choose to do so or not but, given the pinch on the finances, it would be prudent that they take notice of this as these present immediate concerns and downward trend in terms of the way that fans feel about the club.

Given that PTB have now met with Mr Lemsagam, we hope a follow up meeting will be arranged to discuss many areas that remain of concern as well as these survey results from the survey undertaken in February 2020.

Following the news of the last few weeks, it’s imperative that measures are put in place to safeguard the football club as, despite numerous reassurances, we find our financial affairs the subject of national scrutiny time after time. We know from situations involving other clubs (Macclesfield, Bury, Leyton Orient, Coventry, Blackpool, Southend etc) that these concerns simply do not just go away without a fundamental change to how the club operates.  We are 2 years down the line and the lie of the land feels no better and these results prove exactly this.

It’s time that supporters were no longer kept in the dark over these issues as it will no doubt influence the decision of people whether to purchase a season ticket or not, which in turn has a knock-on effect on the financial stability of the club as we have summer months ahead where no football will be played at BP while players still need paying etc.  More worrying is that when fans don’t renew season tickets, they find other things to do and history shows that these fans are incredibly difficult to re-engage with and get back watching regular football at Boundary Park.  The club therefore need to find a solution to this issue before these fans are lost forever.

​Once more, PTB wishes to reiterate that together our voices can and will be heard by the club and the wider football fan base. We will not cease in trying to get answers and holding people to account over their decision making. Supporters are often seen as merely customers at many football clubs but PTB and Oldham Athletic supporters know that the supporters are the lifeblood of our great football club and we will continue to do everything to be treated with the level of respect that this tagline deserves. ​ ​